Zrce beach is the most famous beach in Novalja. It has become a world synonym for summer fun and one of the largest party zones in Europe, so it is also called &quot;Croatian Ibiza&quot;, and
the fun on it never stops. She has been the holder of the Blue Flag since 2003. The beach is pebbly and can accommodate thousands of bathers, and has a large parking lot. In addition to swimming, it also offers the possibility of using various sports-recreational and entertainment facilities such as bungee jumping, jet-skiing, parasailing, cageball or wake-boarding.

A special feature of this beach are the clubs Papaya, Kalypso, Aquarius and Noa, where the fun lasts non-stop, and the world&#39;s most famous d.j.s are in charge of the music, for which performances at Zrće have become a matter of prestige and confirmation of quality.

Papaya is open-air club, and is located on the beach Zrce only 20 meters from the sea. It has existed since 2002, and spreads over 6 terraces with a total area of bout 3000m2. Here at day and night parties you can hear top vocal and latino house as well as r&#39;n&#39;b, with animation by attractive dancers. In recent years, a number of big names of the electronic scene have been guests here, such as Armin Van Buuren, DJ Tiesto, Markus Schulz, Arno Cost, Shapeshifters and
Funkerman. The club has a jacuzzi bar and two slides.

Aquarius is located right next to Papaya. It spreads over 2500m2 and can accommodate 3,000 people, and the parties are animated by MC and go go dancers. Within the club there is a restaurant where you can eat during the day and a pizzeria that is open from noon from 6 am. A
few years ago, it was named the best European summer club by Mixmag, one of the most widely read magazines about clubbing.

Kalypso is the oldest club on Zrće and the founder of beach clubbing in Croatia. It is listened to mostly house and the dance floors, as well as the whole club, are surrounded by pine trees that make the atmosphere really special.

Club Noa was opened in 2011 and covers an area of 2000m2 and is located on a pontoon above the sea. The whole complex includes a club with a swimming pool, VIP space on two floors, 5 bars, berths for yachts and deck chairs, and a beach with a bar, fast food, massage tables and deck chairs. 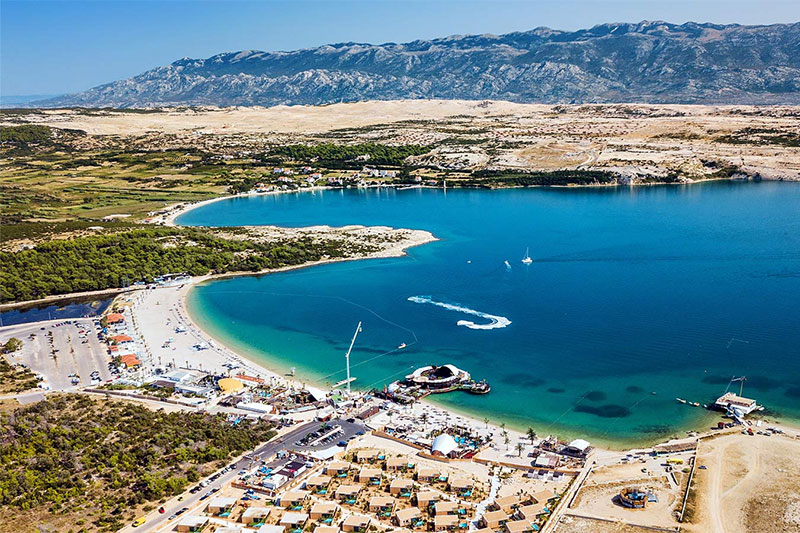