Amazing diving spots around the island of Pag

The island of Pag has some of the most amazing underwater attractions and locations. The stunning Adriatic Sea is full of amazing things, most of which are hidden beneath its surface.
Under the sea surface that surrounds Pag there are underwater caves and canyons, a diverse ecosystem of fish and plants, crystal clear sea, archaeological underwater sites and much more.
To help you get to know this picturesque underwater world full of unusual rocks, reefs and small caves, we have made a list of eight diving spots near the island of Pag whose beauty will leave
you amazed.

The Pag Gate is a sea gate that separates the Pag Bay from the Velebit Channel. They are located near Cape Christopher. This place is known for its monumental underwater canyon which is
filled with small caves and crevices. If you decide to dive here, you will surely be delighted.
There is a beautiful beach near the dive site, so you can relax and sunbathe before embarking on another dive.

West of the island of Pag is Permuda, the island of the famous underwater "cathedral". It is one of the most famous diving places on the Adriatic. While the light shimmers in the holes and the inner cave, some say it looks like a glass door and that is why this diving spot is called the cathedral. In the main cave you will see hundreds of fish and corals whose colors make the whole dive even more magnificent.

Gorgonian corals of the island of Maun

The island of Maun is located west of Pag Rebara. Although uninhabited, it is an interesting island. The place is ideal for all categories of divers. Night dives are truly an exceptional
experience. The diversity of this island is reflected in its azure blue depths, filled with different organisms. The seabed of Maun Island is home to some of the most beautiful species of
Gorgonian corals that create magnificent tree-like formations. With their colors ranging from yellow to bright red, they are a sight that everyone who wants to learn more about the flora of the Adriatic Sea will want to see. If you look carefully enough, you may also come across large colonies of shells, hidden among the corals. The fields of Clavelina sea squirrels are located at a depth of 30 m, and the sandy seabed is home to leopard bulls and sabella sabella which is sensitive to current changes. Divers may also encounter triple worms when on the surface.

Another place that is ideal for diving is the small island of Pohlib where you will find a large underwater wall containing four caves as well as a stunning underwater canyon. As the caves are
quite large, you can easily enter each of them and explore their interior, see the different species of fish that have made the caves their home and enjoy the beauty of the Adriatic seabed.

from a sunken Roman merchant ship from the 1st century BC. They are located at a depth of about 30 m in the small bay Vlaška Mala in the Velebit Channel, near the
ferry port Žigljen. In this place with amphorae in cages are preserved vessels from the 2000s; the fate of the ship that carried them is not known, but in the Velebit Channel the usual culprit is a sharp northern bora. The place is covered with various organisms. The unique decoration of the island of Pag – Pag lace – has been recognized in the sea lace. Today, amphorae abound in life and are home to broiler eels, scorpions, octopuses, sponges. Other sights include an iron anchor, an original amphora cover and a piece of ground stone of the ship's mill.

Places that are definitely worth seeing include wrecks. The 18-meter-long Golija wreck and the Tabinj wreck near the island of Dolin are suitable for advanced divers. In the very attractive Rose wreck you will come across octopuses and eels.

The bays on the island of Pag are ideal for enjoying the summer months, and one of them also carries the legend of a sunken city, compared to Atlantis. On the seabed in the bay of Caska lay
the remains of the entire city, and today's place has only a few houses. This extraordinary place on the island of Pag attracts history lovers and explorers as they want to discover the past of the ancient Caska that sank. The remains have shown that the sewer system is of Roman origin, but it cannot be said with certainty whether the city is even older. Caska sank in the 4th century when Pag was hit by a devastating earthquake, but some of its secrets are still waiting to be revealed.

Lun is a place for diving at the beginning of the island of Pag with a fantastic colorful wall covered with gorgonians. Here you can notice all the different species we have in our sea, from
guards, octopuses, scorpions, all kinds of stripes, to fish like damask, humpback whale, bream and with a little luck that tuna can pass by you. If you want to paint wide angle pictures, this is the best place. With colorful gorgonians, your image will be unforgettable. 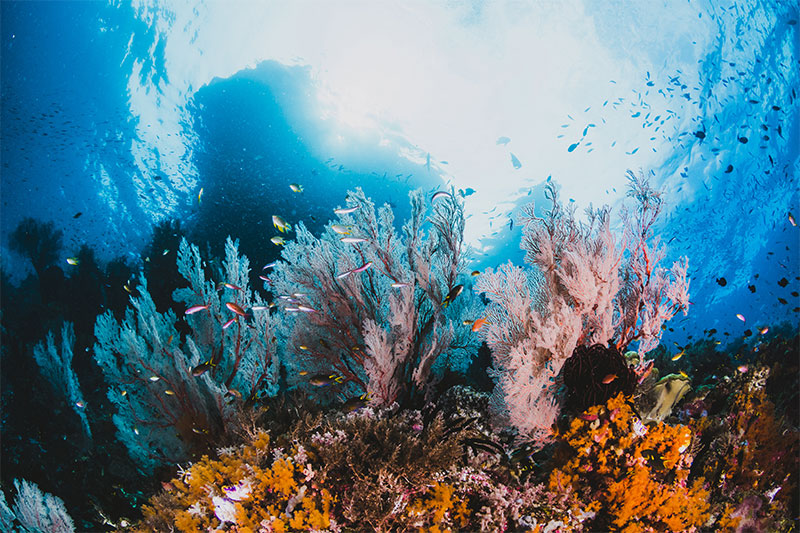